Getting To Know Digital Marketing

What I Cover in the Complete Course

First Things First – Look After All Those Passwords!

What is Hosting and How to Choose a Good Provider

Getting to Know the Internet

Uploading Your Webpage to Your Hosting Provider

Add a Page With a Hyperlink, Upload and Test

Understanding Caching and How to Use

You’ve Come To the End of the Free Lessons, What’s Next?

Tools and Knowledge To Set You Apart

Introduction to WordPress – Installing and Using a Theme, Making Edits

What is a Content Delivery Network and When to Use

Must Have Resources and Essentials

Creating Creatives – How to Do Your Own Images, Graphics Photos and Videos

Into the Intricacies of Social Media and Marketing

Customer Avatars (AKA Personas) and Why You Need to Create Them

How to Calculate Your Profit or Loss – Funnel Stages

How to Setup and Use Google Analytics

Social Media Strategy and Tools to Use 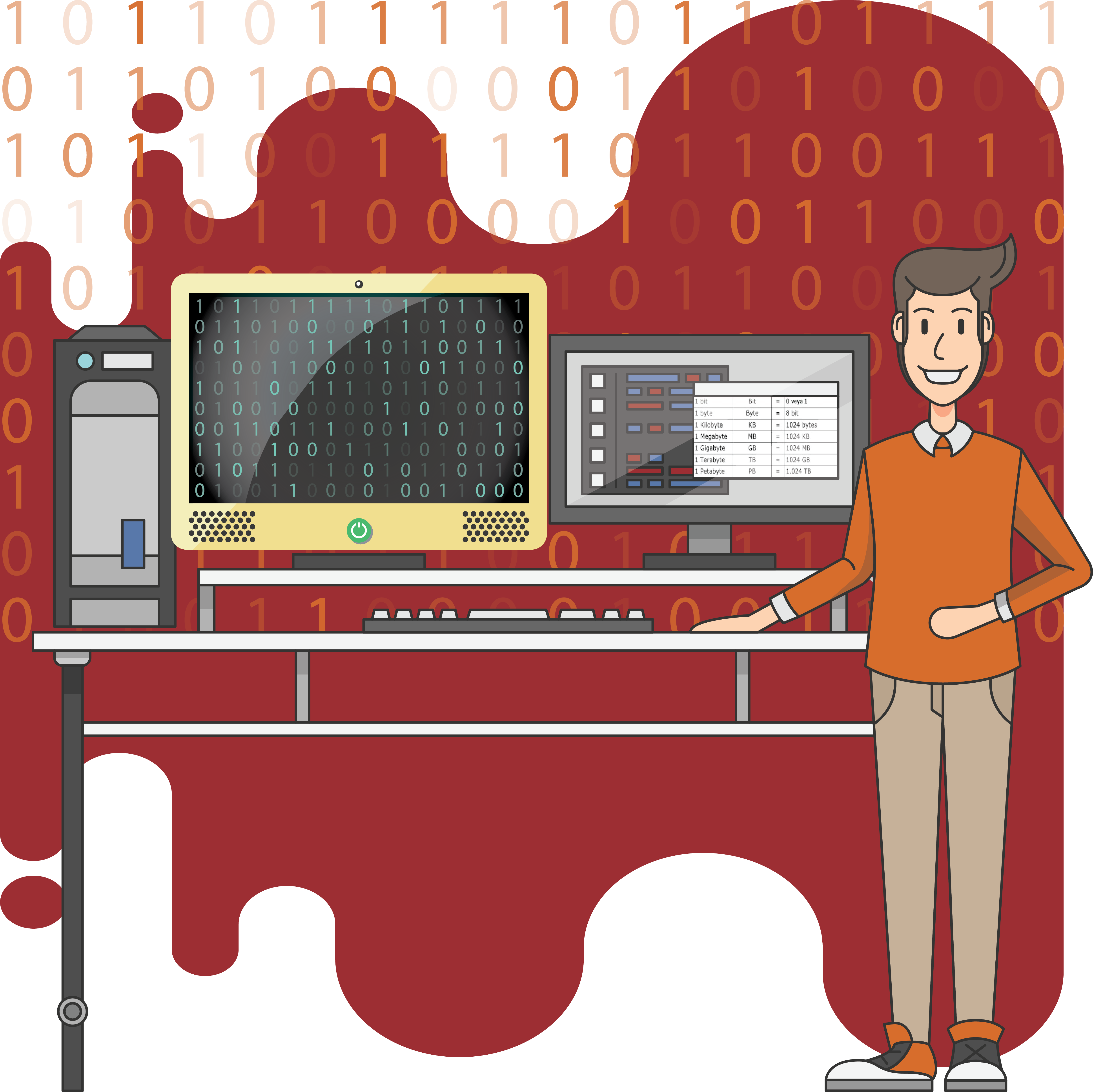 OK, so some would say you really don't need to know what I’m going to explain here. I have a different view. For the small amount of time it will take you to learn some basic knowledge I think you will find it very worthwhile as it will always be relevant.

So, Bits and Bytes, What the Heck Are They?

In our everyday number system – decimal - we use ones, tens, hundreds, thousands - and we probably all remember at school we had a units column, tens column, hundreds column for our junior learning.

The little numbers 2,1,0 are ‘to the power of’ and we probably remember thinking of the 2 as the square of a number. So 102 is ten squared which equals 100.

Hope you’re still with me already

This is the tens based number system.

Computers use the binary number system based on 2. Why 2? On and off. Electronic circuits (think of a battery wired to a light bulb via a switch) – either the switch is open or closed and the light bulb will correspondingly be off or on. 0 or 1. That’s how it came about. Obviously things have moved on a bit since then. Anyway, using the same idea of columns we can write:

So a 1 or 0 is called a bit. And we call 8 bits a byte. So always remember that to convert bytes to bits, multiply by 8. So bits to bytes divide by 8. And pay attention to what you hear as when speaking they can easily be confused. A kilobyte can sound like a kilobit in an unclear phone call.

Moving on, we have the American Standard Code for Information Interchange, ASCII for short. This defines how we represent characters – letters, digits, symbols. The following is just an extract of the whole set so you can get the idea.

So to spell Bad you’d need:

Now, if we think about communicating that we would need to send it down a wire. You could think in terms a bit like Morse code where someone opens and closes a switch on a wire that goes to a light bulb somewhere, and somewhere could be a long distance away. So by observing the light bulb you could write down the series of ons and offs then look them up in the table above to work out what was being sent.

That is a very crude explanation but it is also basically how it works. Very simple to understand really. However, modern reality is much more complex – it is not just the 1s and 0s of your message that get sent, there is a whole bunch of other data that gets added to the message. But I am not going into any of that here really. The data that gets added to your basic message includes data about sender and receiver, error checking and correction. And of course, the internet isn’t a wire with a switch connected to some lightbulb somewhere. The internet is a vast web of interconnected computers, connected by fibre optic cable networks, copper cable networks, Wi-Fi, routers, servers, and a ton of other technical wizardry that allows young Peter in New York to video chat with his Mum who is working in London via the internet.

All I want you to know is what a bit is and what a byte is. And from there we can deduce that a kilobyte is roughly a thousand bytes (actually it is 1,024). So:

Get the idea? Great!

Our community is filled with awesome, like-minded individuals who love to share ideas and resources!

Please log in again. The login page will open in a new tab. After logging in you can close it and return to this page.

We use cookies on our website to give you the most relevant experience by remembering your preferences and repeat visits. By clicking “Accept”, you consent to the use of ALL the cookies.
Cookie settingsACCEPT
Manage consent

This website uses cookies to improve your experience while you navigate through the website. Out of these, the cookies that are categorized as necessary are stored on your browser as they are essential for the working of basic functionalities of the website. We also use third-party cookies that help us analyze and understand how you use this website. These cookies will be stored in your browser only with your consent. You also have the option to opt-out of these cookies. But opting out of some of these cookies may affect your browsing experience.
Necessary Always Enabled
Necessary cookies are absolutely essential for the website to function properly. These cookies ensure basic functionalities and security features of the website, anonymously.
Functional
Functional cookies help to perform certain functionalities like sharing the content of the website on social media platforms, collect feedbacks, and other third-party features.
Performance
Performance cookies are used to understand and analyze the key performance indexes of the website which helps in delivering a better user experience for the visitors.
Analytics
Analytical cookies are used to understand how visitors interact with the website. These cookies help provide information on metrics the number of visitors, bounce rate, traffic source, etc.
Advertisement
Advertisement cookies are used to provide visitors with relevant ads and marketing campaigns. These cookies track visitors across websites and collect information to provide customized ads.
Others
Other uncategorized cookies are those that are being analyzed and have not been classified into a category as yet.
SAVE & ACCEPT